But you know what the weekend includes….pizza parties, barbecues, mimosa brunches. More wine (alright, a lot more) and less water. So, when is it OK to have a little junk food here and there?

For me, it’s on the weekends. Some weekends I indulge more than others. It depends what event is going on and what kind of food we’re eating, and of course, what mood I’m in. Last weekend I threw clean- eating out the window on Friday night. I had a hard week and was craving Ledo Pizza cheese fries like cray cray.

I’m a firm believer of the occasional cheating if you’re eating clean. If I ALWAYS deprive myself of some of my favorite foods, I won’t continue to eat clean on a regular basis. I don’t think it’s a huge deal to eat a few junk food items occasionally. I’ve heard of a lot of people doing the 80% and 20% regimen, or eating clean 80% of the time and eating whatever they want (to an extent) 20% of the time. I’d say I’m a teensy bit more hardcore than that. I try to eat clean 90% of the time, and then allow myself to “cheat” 10% of the time.

I’ve been at a bit of a weight plateau lately, which frustrates me. I’m thinking part of it could be attributed to stuffing my face with junk food on the weekend, and gaining back the pound or two that I lost during the week. It’s a vicious cycle, man.

So this weekend, I’ll definitely have a treat or two for sure. I’m going to a barbecue tomorrow afternoon and a brunch on Sunday. I might have a hot dog at the barbeque and maybe some potato fritters at brunch, but I think that’s alright. This weekend I’m just not going to straight up plan to eat fast food for meals. If I don’t gain a pound or two on the weekend that I have to lose again during the week, I should be that much closer to my goal weight, right?

I think paella is a technically a Spanish dish. So I don’t even really know what paella officially is, but it sounds better than “a bunch of shit thrown into a pot.” Tuna and I were looking through recipes on clean eating blogs last weekend, and found this one and this one.

Since I had some of the ingredients but not others (annnnd the wrong cookware for this one), I altered the recipe a bit.

Chop up the pepper and onion.

Put the cut up pepper, onion, and spinach in a big ‘ol skillet with a dash of olive oil.

Stir veggies until spinach is dark and shriveled (like my expert cooking vocab?) and onions are clear.

Throw cooked veggies into a big ‘ol pot (my skillet doesn’t have a big enough lid to put on it to look the rice, so I had to transfer to the pot w/ lid.)

Add 1 cup brown rice, 1 cup brown water to the pot w/ veggies. Add all of the spices & garlic listed above.

Turn up the heat on the stove burner to high, heat uncovered until boiling.

Turn down the heat to simmer, cover for about 45 minutes.

Stir the pot (ha…don’t I always) & put the lid back on for about 15 more minutes.

Pour out shrimp into a strainer, thaw for 6 min under cold water.

Chop off the shrimp tails.

Throw the shrimp into the pot 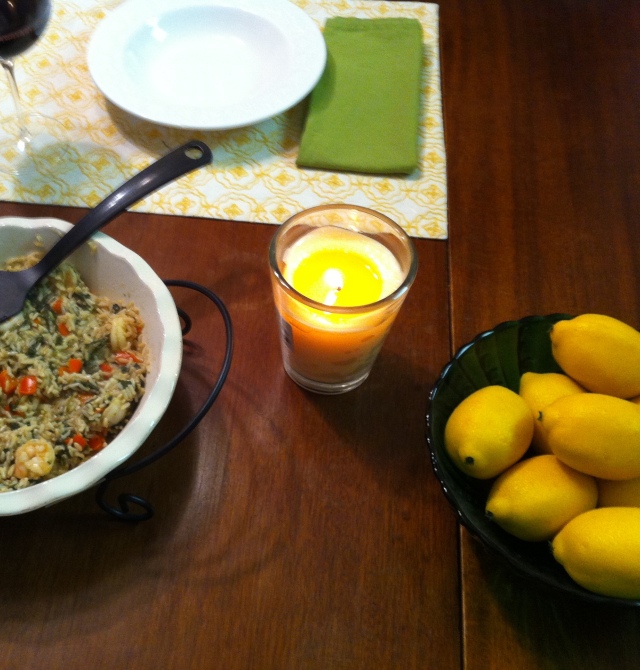 YUM. I’ll have some wine with that, please.